It’s been a long journey to the Australian Gold Coast for British shot put champion Rachel Wallader, in more ways than one.

Despite selection for both her first European Indoor and World Outdoor Championships in Belgrade and London respectively, her 2017 season was hampered by a back injury which affected her training and competition schedule for a number of months.

At one point Rachel wasn’t sure if she would even be able to take her place in the World Championships. “I didn’t get what I wanted out of last season”, she says, reflecting on a breakthrough year that many young athletes would be delighted with. Despite her summer season being disrupted with injury, and ending the year feeling like she should have done better, Wallader still took some positives. “I did gain valuable experience at my first European Indoor Championships, where I narrowly missed out on the final after producing the best three throw competition of my life in qualifying”.

That championship experience will no doubt stand her in good stead as she prepares to compete in her second consecutive Commonwealth Games, which Rachel says she is prepared for after combating her injury problems. “My preparation is going well at the moment. I have changed my training programme now in the lead up to the games, and the adaptations are working nicely”.

Perhaps unusually for an athlete of her standard, Rachel is almost fully self-coached, and creates all of her own programmes. How does she manage this in the build up to a major games? “There are some real benefits to controlling my own training programme”, she admits. “I really enjoy researching and developing new training ideas.

“By having the control to be able to introduce new ideas, I am able to cater for all of my training needs and integrate exercises that suit me perfectly. It can be tough taking control of your programming yourself. Sometimes I wish somebody could just give me a folder and say “here – do this!”. However, I enjoy the challenge, and I’m not totally alone”.

Her latter comment refers to her training partners, long-term boyfriend Richard Woodhall and British under-20 shot put champion Dan Cartwright. “Training with Richard and Dan helps a lot. We all work together and each bring our own ideas to the sessions. Being able to watch each other throwing and in the gym allows us to feed back and discuss elements we feel might need changing”.

Despite her current training setup, Rachel admits she is still very proactive in seeking further advice if she feels it is required. “I access help from various sources”, she says. “In the last two years I have spoken to world-class coaches about everything to do with training, and have spent time with a number of world-class athletes to gain input from those who have been there and done it. However ultimately, I have the control to be able to analyse and adapt my programme for myself, around my needs and my life”.

One such element of her life that Rachel has to plan around is her full-time job as a Work Placement Officer at Sandwell College. “Working full time whilst trying to train and compete can be really tough sometimes. My working week consists of waking up at 6am, before leaving the house at 7am to start work at 8.30am. I finish at 4.30pm, then drive an hour to training and don’t normally get home until around 8.30pm”.

It doesn’t sound like a setup that would be overly conducive to maximising athletic potential, but Rachel says that the college ensures it works for her. “I am very lucky with my employers. They alleviate some of the stress of my situation by being so understanding. They allow me to be flexible with my hours and they are a big help in my preparations.”

Our attention turns back to the small matter of preparing for, and competing in the Commonwealth Games in just a few days; an opportunity which Rachel is relishing after touching down in the Gold Coast a matter of hours before we spoke. “I am feeling very excited to be representing England in the Games again. The competition will be really exciting and I am of course excited to be spending time in Australia!”.

Now that she has had time to reflect upon her winter training, what is Rachel hoping for in terms of her performance? “I would really like to improve on my fourth position from the Glasgow Commonwealth Games in 2014”. That seems like a slightly coy way of saying she would like a medal; is that the case? “Well the standard of the event internationally has increased since the last Commonwealth Games. However, so has the standard of English shot putting, so we will see…”. 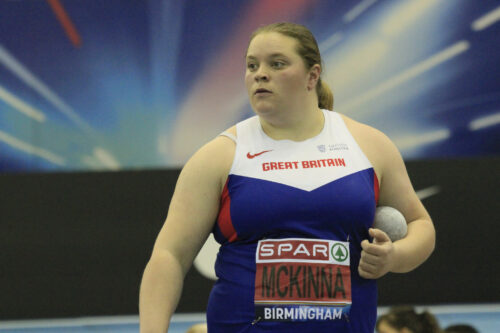 Sophie McKinna looks on as Rachel Wallader throws in a tense battle at the British Indoors Photo: MV4R Photography.

Rachel’s mention of the ever-improving level in the UK leads me perfectly onto a question that I couldn’t end the conversation without asking. For those who are unaware, Rachel and Sophie McKinna locked horns in what was undoubtedly one of the most exciting competitions of the Indoor domestic season at the British Indoor Championships.

With McKinna leading right up until round 6, Rachel threw a PB with the penultimate throw of the competition to take the lead before it looked like Sophie had taken the title with the final throw. That throw turned out to be just 3cm shy of the PB that Wallader had claimed just seconds earlier. So, Rachel – did you think Sophie had beaten you? “Yes – I honestly thought she had, based on her reaction when she released the shot – she knew it was going to be a big throw before it even landed.

“The spectators’ reaction also gave me the indication that Sophie had gone further than me. I couldn’t see the mark from where my throw had landed to be able to tell, but in my head I thought Soph had done it. When we were waiting for the results to come through I was just getting over the buzz from the last two rounds and wondering how close a call it would be. Once it had been announced I couldn’t believe it. I honestly felt for Sophie because she had such a good series of throws and produced two personal bests when it mattered”.

Their rivalry has spurred British women’s shot put to be the best it has been in a generation, and one which looks set to continue as the two battle it out alongside England’s Amelia Strickler for a place in the Commonwealth Games final on April 13th. 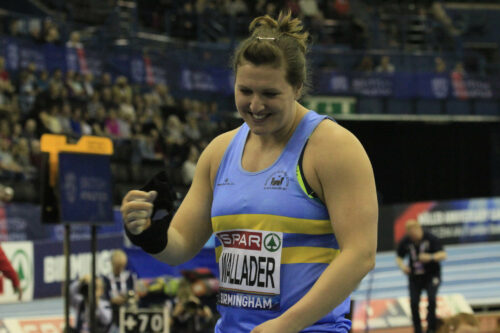