At a first glance, the athlete life Jess Mayho leads looks pretty standard, if a little hectic. She played other sports, including netball, at a high level in her younger years. She isn’t on funding, so the 27-year-old works 35 hours a week as a facility bookings manager at the University of Leeds. She trains five or six days a week, usually twice a day.

Her days start at 6.30am, and finish around 10pm. She spends Sunday evenings prepping food for the following week to ensure she manages to keep her nutrition consistent whilst working and training. She has an excellent relationship with her coach – she trusts him – and says he believes in her talent.

But here is where the similarities with almost every other talented young athlete stop. Because Mayho – who finished the 2019 season ranked second in the country behind Sophie Hitchon, lives in Leeds – and her coach Jorge Rodrigues lives in Portugal, meaning their coach-athlete relationship is almost entirely digital. For the duration of her throwing sessions – usually lasting at least 90 minutes – Jorge is on FaceTime, watching Jess throw and providing technical advice through a screen.

Jess films all of her lifts in her strength and conditioning sessions, and sends them to Jorge via WhatsApp for instant feedback. “When it comes to a competition, my mum videos my throws and sends them to Jorge via WhatsApp. Jorge then responds and mum feeds back to me before my next throw. It’s unique to us, but it works. It’s a team effort!”, she explains.

So how does a young Yorkshire lass end up being coached by a man living in a different part of the world? Jess was introduced to athletics through her sister, who at the time was on the British Cycling academy programme. Her sister’s strength and conditioning coach was the late Mike Morley, who was also a well-known hammer coach. “My sister told Mike I was quite tall for my age, (16) with long levers which are a good asset for hammer throwing.

“He invited me to the local track where I picked up a hammer for the first time. I definitely provided some entertainment – the cage doors got a battering!”. And that was it, Jess was hooked. She kept going back, gradually increasing her training under Mike’s careful tutelage and after graduating from university in 2014, decided to give up netball to focus on becoming a hammer thrower.

Mike sadly passed away in 2014, and Jess’s training partner at the time, Matt Lambley, took over the mantle of coaching her. In 2017, Matt, Jess and a group of other throwers headed out to Portugal to visit some facilities that had been recommended to them for a warm weather training camp.

It was here that Jorge and Jess first met. “Jorge approached Matt and said that I would throw a long way”, Jess says of her initial contact with the Portuguese coach. At the end of the camp, Jorge offered to help Matt with Jess’s development if it was ever required and the three of them kept in touch. 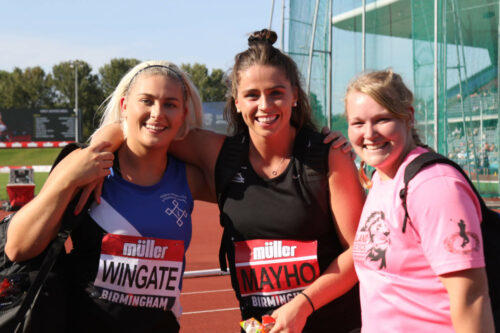 Then, at the end of that year, Jess found herself having to undergo knee surgery, and the recovery time afterwards gave her plenty of time for reflection. Jess recognised that in order to improve, she needed to make big changes to her throwing technique, but decided that even if she found another coach in the UK she would have to travel long distances to see them and there was no guarantee that she would be able to see them face-to-face regularly.

She took a risk. “I was so grateful to Matt for coaching me – especially after Mike sadly passed away – but I felt like I needed to make a change. Leaving a coach is a big risk to take but Matt supported my decision and I am really grateful for everything Matt did for me. Jorge and I discussed how we would manage contacting each other and it was agreed we would communicate over messaging and video – I would send him lifting videos, and video call him during throws sessions”.

And that was that. Jess and Jorge embarked on a very unique – but very successful – coaching journey which has seen her improve by over three metres in less than two years, culminating in a 66.44m PB at the Manchester International in August this year. Jess is confident however that this is just the beginning: “Jorge has many years’ experience of being a coach to international level athletes and I truly believe he can take me to where I want to go”.

Jorge is using all of his experience to make this work, and the pair make sure they get the opportunity to meet face-to-face throughout the year with a diarised plan which they both commit to – with the occasional ad-hoc visit for good measure. One of these ad-hoc trips recently resulted in Jorge’s first ever visit to Leeds. “Jorge told me if I threw 65m, he would come to Leeds. I threw 65.18 at the CAU championships and he was on a plane the next week!”, Jess explains.

There have of course been challenges to overcome – the language barrier being one of them. Jess admits that for the first few months, their digital training sessions were like “games of charades”, with Jorge only knowing broken English and Jess not knowing any Portuguese whatsoever! Jess says that Jorge’s English has developed a huge amount, but describes her Portuguese as very much a “work in progress”. It is far from conventional, but Jess has worked hard to create the perfect environment for her to flourish.

Whilst she says the financial help of British Athletics funding would help her greatly, Jess explains that having the freedom to make her own choices is working: “I am really pleased that I have put myself in a position where I am not reliant on a system, and I am in control. I am in the driving seat of my athletics career”.

She has independently secured a number of private sponsorship deals with businesses, which cover some expenses, but Jess is still trying to source support for the rest. In addition to Jorge, Jess has built a network that includes her physio Ollie, the team at her gym (Implexus Leeds) and a supportive workplace, all within a 20 minute radius.

In amongst all of this, Jess somehow manages to find time to give inspirational talks to audiences of all ages. Recently she has started giving talks to high-flying businessmen and women – people who lead lives just as busy and chaotic as hers, but for very different reasons. “I relate to them with being on the ‘merry-go-round’ of life”, she says, and explains how she uses her aforementioned injury experience to highlight the importance of reflection and assessing happiness in their chaotic lives. It would appear that Jess has a natural flair for this too – she explains that one lady who was in the audience of one of her recent speeches contacted her to say she has subsequently left the job she was unhappy in to pursue a totally different career.

On the other end of the spectrum, Jess is passionate about inspiring the younger generation to live an active lifestyle, and visits schools to promote a healthy lifestyle to children. She also sees these visits as the perfect opportunity for promoting throwing: “When I take my hammers in to show the children, more often than not they have never seen them before. It’s great to raise the profile of the event, as hammer doesn’t seem to be a part of the athletics curriculum in schools”.

As is so often the case when chatting to throwers, this leads on to the topic of a general lack of exposure for the events. Jess’s thoughts on how this can be improved echo many of her compatriots – the inclusion of the hammer in competitions such as the Anniversary Games, Birmingham Grand Prix and the Diamond League. “I think as a country we have a lot to learn from Europe on how they host field events, in particular the throwing disciplines”, says Jess. With her time spent competing and training on the continent, she should know.

So what is next for Jess? All being well, there will hopefully be a European Winter Throws competition in Portugal in March 2021, but she also has her sights set on being selected for a major championships. It is a big task, but one she relishes: “Europe is so strong in the throwing disciplines it will be tough to make the cut but that doesn’t scare me. This is what goals are for, I don’t want to put a ceiling on my ability”. Beyond that, Jess’s long-term goal right now is to make the team for the Birmingham Commonwealth Games in 2022. If she gets there, let’s hope Jorge can be there in person and Jess’s mum can have the day off from WhatsApp!

Looking to read more throwing features? There are interviews with Scott Lincoln, James Tomlinson, Harry Hughes and Lewis Byng on our site.