The European 5000m silver medallist lines up in the 3000m where she will go alongside male competitors in the B Race, while World University Games gold medallist Jess Judd is the pick of the bunch in the women’s 3000m A Race.

Rising 800m star Keely Hodgkinson is another athlete to watch out for. The 18-year-old set a European under-20 indoor record time of 2:01.16s in winning the British 800m title in February, following it up with a 2:02 outdoor best in Manchester earlier this month.

Her women’s 800m A Race could be the most anticipated battle of all with European under-23 silver medallist Ellie Baker, World Athletics Championships steeplechase competitor Aimee Pratt, British Universities’ (BUCS) 1500m champion Georgie Hartigan and Irish internationals Katie Kirk and Louise Shanahan all joining the teenager.

The action will be streamed live and you can watch it here from 1630 BST on Tuesday, with coverage available on RunnerSpace in North America, as well as on-demand around the world afterwards. 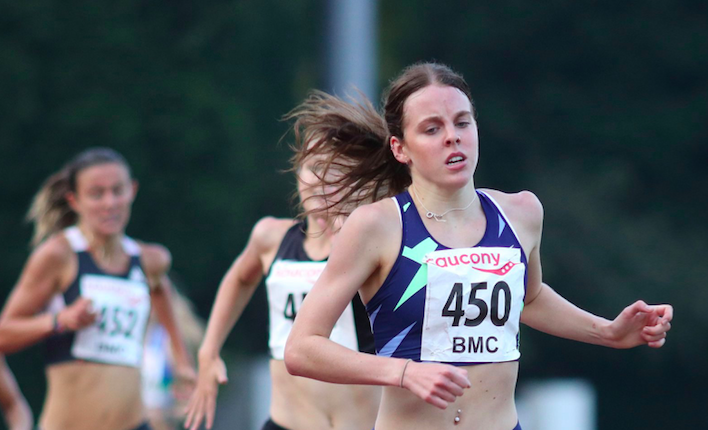 Keely Hodgkinson has taken over two seconds off her 800m personal best in 2020. Photo: David Lowes/#TeamLowesRun.

In the 1500m, Pratt’s Team GB steeplechase colleague Lizzie Bird takes on Commonwealth Youth gold medallist Erin Wallace, who bettered her 1500m time to 4:12.57s in Poland on Wednesday night. British indoor champion Holly Archer is another coming in with good form in 2020, having run smashed her personal best with a 4:13 clocking to take the national title.

They will be joined in the A Race by 2015 European junior runner-up Amy Griffiths – who won the BUCS indoor title this year – and four-time BUCS medallist Steph Pennycook, along with England 800m champion Kirsty Fraser and junior internationals Cesca Brint, Saskia Millard and Eloise Walker.

Beijing 2008 Olympian Tom Lancashire is also down for the 1500m, in what would be his second track race in two years. The 35-year-old is expected to feature alongside 3:42s runner Sol Sweeney who is a training partner of Laura Muir, Jemma Reekie and the aforementioned Wallace.

Check out a full set of start lists here, with the event timetable available on this page.