Olympic bronze medalist Holly Bradshaw joined us as our third guest on the Vinco Videocast series giving us a low down on her Pole Vault career, whats it’s really like to be a professional athlete and how you can get into Pole Vaulting!

Bradshaw also hinted at the next Olympics in Paris being her final time stepping onto the big stage as she talks about what what direction she wants to take her life having lived most of it as a professional athlete.

Watch the full interview below: 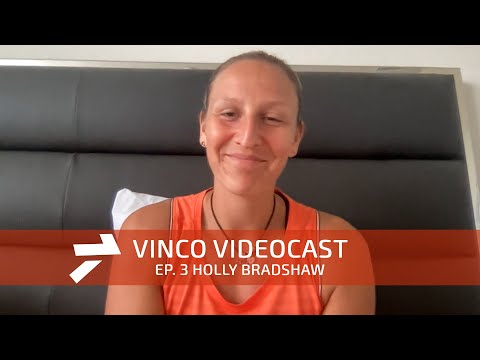 Talking on her Olympic success, this was the reward for what has been years of graft for Bradshaw to reach the top level in the sport. The postponement of the games was not going to stop her in her tracks and the lack of audience at the venues was not something that she had any trouble overcoming.

“I’ve been on a journey where I am a very controlled, processed driven athlete, everything comes intrinsically from me…  I’m an athlete that can turn the crowd off, not to say that I don’t feed off their energy but when I’m on the runway I am going through my mantra, so not having a crowd there actually worked really well for me.”

This year has been a slower start than normal for Bradshaw having to withdraw from the indoor season due to health, body and mental challenges, but she is now back on track currently on training camp and is ready to start the 2022 outdoor season well.

“This has been an unusual period for me but currently I’m back on track and training is going really well, getting my speed work back in and being back in the gym is great.”

Even when entering athletics, pole vault is not at the top of the list of events you get into immediately and Bradshaw talks about trying and testing different sports early on in her life which is what allowed her to decide what she wanted to peruse to a higher level.

“I started with football when I was four years old, moved into gymnastics for ten years, rounders, any sport I could participate in I would do. I then went down to blackburn harriers to try out athletics.”

An athletes career does not last forever and only the athlete can decide when is the right time to move on. Bradshaw can find comfort in making the move away when she decides to do so having had international success but she hinted that Paris could be the time where she moves on to new challenges.

“I’m 99% sure that 2024 and Paris will be my final season… which is why I’m seizing every moment and enjoying every opportunity so as not to look back and have any regrets.”

If Paris really is to be her final bow out, it will be a career to be remembered. Continuous improvement each year and consistently turning up is what ultimately led Bradshaw to her Olympic medal success, which will have inspired many youngster to follow in her footsteps.