Harry Hughes: “I know I can throw well beyond 80 metres”

For British number one javelin thrower Harry Hughes, 2019 has been an impressive breakthrough year. He is the first Brit to throw over 80 metres since 2012, with a personal best of 80.32m set at the Loughborough International meeting in May.

The 21-year-old grew up in the Suffolk countryside where his mother’s side of the family have a farm. “There’s a big meadow where I used to go out by myself with a javelin and discus,” says Harry, who also developed a love for fishing, something that has kept him occupied when injured and in breaks between training.

“My brother was a club level triple jumper. I was nine at the time. I was bored and wanted to do something so I tried out shot put, discus and javelin up to under-17 level, but javelin was always the one I was best at.”

Harry was fortunate to train at West Suffolk Athletics Club, not far from the top two coaches in the country. “Good throwers used to come like Goldie Sayers and I always looked at Goldie as a massive inspiration.” 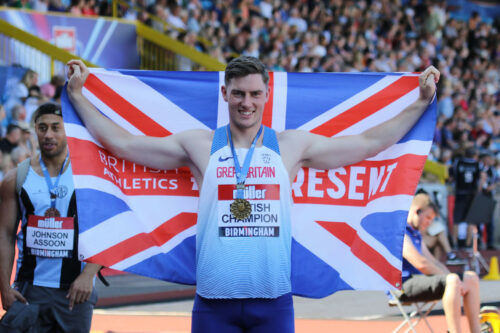 Overcoming serious injuries is one reason why we have seen Harry progress so well this season. He now competes with pins in his elbow and manages the discomfort. “With the javelin, there are always injuries and tightness because there is so much force going through your elbow.

“I could barely move it a few years ago, but now it isn’t so bad and I probably have 90 per cent range. Most of the time, I can throw as hard as I want to as long as I’m doing it technically correct. I have to be careful, but psychologically it doesn’t affect me.”

With those last five words in mind, Harry has been feeling positive over the last twelve months, but admits some caution was exercised last winter to avoid reinjury. “I needed to make sure I was healthy but coming into the season I knew I was in shape, opened up with 78.89m, and training was going better and better. It was only a case of having the right conditions.”

When it came to the morning of the Loughborough triumph in the spring, all wasn’t immediately perfect. “I got there and didn’t feel great on the day, actually quite lethargic. Then something clicked in my head, I turned round to Mark (Roberson, his coach) and said ‘I’m doing it, it’s going to happen today.’ My confidence was there.”

Confidence continued as Harry won the national under-23 title along with the prestigious Halle Throws International in Germany in the same age group category. Sadly, injury stopped him from competing at the European Under-23 Championships in Sweden.

“My season started off with a big bang. Then it is a question of whether it declined or not. From a training and behind the scenes point of view, apart from when I had a heel problem, I’ve felt better than I have before! Training is way beyond expectations. I’m happy with where I’m at, but it is frustrating not to have shown it in competitions. I know I can throw well beyond 80 metres.”

When thinking about taking the next step, Harry knows that while he is the best in Britain for seven years, the qualifying standard for the World Athletics Championships in Doha is 83m and it is two metres further for the Olympic Games. His views echo those of Scott Lincoln – who has broken 20m in the shot put this year – but knows that in his event, further is needed to be successful at major tournaments.

“Scott is bang on. 80m is really good in terms of British level but from a world perspective it is poor.” It’s annoying that it’s been that long, because someone should’ve been doing that every year. 85m is the goal and it is a high standard. Only 18 in the world have done it. Based on being in the top 32 in the world, it’s not that bad. 82.50 or 83m to be certain is most likely. If you break it down, it is realistic and reasonable.”

Considering why someone hasn’t been closer to the standard in recent times, Harry admits: “It is debated a lot in the javelin world. Everyone is trying to figure out why there are five Germans over 87m.”

“I think it goes in circles. Mick Hill, Steve Backley, and Mark Roberson will come round again, we just have to wait and bring through the right talent. I also think we lose a lot of our talented throwers to rugby, which in Germany rugby isn’t as big.

The support of Mark Roberson, his coach, has also been key to Harry pulling through. Mark competed at the European Championships and Commonwealth Games and is third on the UK all-time list behind Backley and Hill with a furthest throw of 85.67m. In other words, Harry has a mentor with achievements he aspires to.

“He’s achieved so much,” says Hughes of Roberson, who has also broken world records as an indoor rower. One of the biggest plusses is that Harry is the only athlete that Mark coaches and he benefits from individualised training programmes.

“My previous coach was brilliant but coached a handful of athletes. Especially because of the injuries I’ve had, I have needed more time to recover in the right way with technical and personal input. One-to-one works perfectly for me. I’m not bothered about having to train on my own.”

With the focus turning to Tokyo 2020 and that 85m standard, the British senior champion has set out what he feels is needed to eclipse 2019. “Number one for me is confidence. I know I can do it, it’s just getting the right opportunities and competitions to prove myself. Nothing needs to change apart from tweaking a few things.”

“Getting the right opportunities” feels like a key phrase as Harry outlines the financial challenge he faces in trying to forge a career as a professional athlete. “Last year I didn’t go warm-weather training because I didn’t really have the funds to do it. That increases your chances of making it as it puts you in an elite environment. I’m hoping to spend two weeks in South Africa in January, and then maybe somewhere like Portugal in March, just to give me that head start going into an Olympic year.

Fortunately, Harry’s lifestyle is complimented by working in partnership with his two brothers, who appreciate his need for flexibility. The trio own Dangler, a marketplace for buying and selling fishing equipment.

“They understand that succeeding in business takes similar dedication to being an athlete. We had an honest conversation about how it would work and being brothers meant we could work it out. During the winter, they’ll become full-time so I can go train in the morning, work for 5-6 hours and then go and train again in the evening.

“One was a triple jumper, the other was quite a high level footballer. Both have kept up general fitness, as has my dad who was a rugby player. Everyone thought I would be the academic one as at a young age I was quite clumsy!

“I love javelin. I’m a fan and I watch old competitions over and over again. Johannes Vetter (above) is someone I like because of his pure power and the way he throws is aesthetically clean.

“Also Mark Roberson I model myself on, and Magnus Kirt, I’ve never seen a left-hander do that well and he’s come to fruition at a later age than most.” Kirt of Estonia is the current world leader heading into Doha, but his first 90m throw came this year at 29-years-old. At Harry’s age, his PB was 72.97m. “That’s a big inspiration that if you keep at it you can get there.”